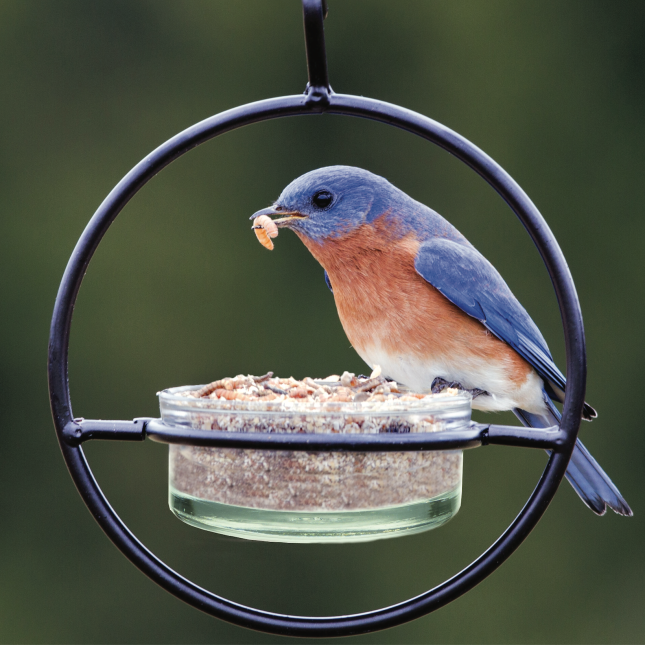 Bluebirds will readily come to mealworm feeders, which are especially beneficial during nesting season when they are feeding babies, as well as during winter when other foods are hard to find. During winter, live or dried mealworms can be served, but during summer, live mealworms are best as they provide not only nutrition, but also the necessary moisture that the babies need. (Parent birds don't carry water to the nest and insects are the only source of hydration babies receive.)

Bluebirds are beautiful, and the sight of one can be thrilling! In entirely natural habitats, bluebirds like to nest in natural cavities found in trees on the edges of prairies and grassy pastures. Development, however, has destroyed much of their native habitat so man-made nesting boxes has given them more opportunities for survival.
By placing bluebird nesting boxes in your yard, you can take an important step toward helping this species, and you'll be delighted by the antics you see as the bluebirds raise their family in front of yours.

The right kind of yard

To have a successful bluebird nesting box, you must have the right type of yard. Bluebirds prefer open spaces—large country or suburban lawns, pastures, grassy lanes, cemeteries, golf courses and parks—primarily because these areas are full of insects, which are bluebirds' favorite food. If you don't have this kind of property, you can still install houses for other species, such as wrnes and chickadees. 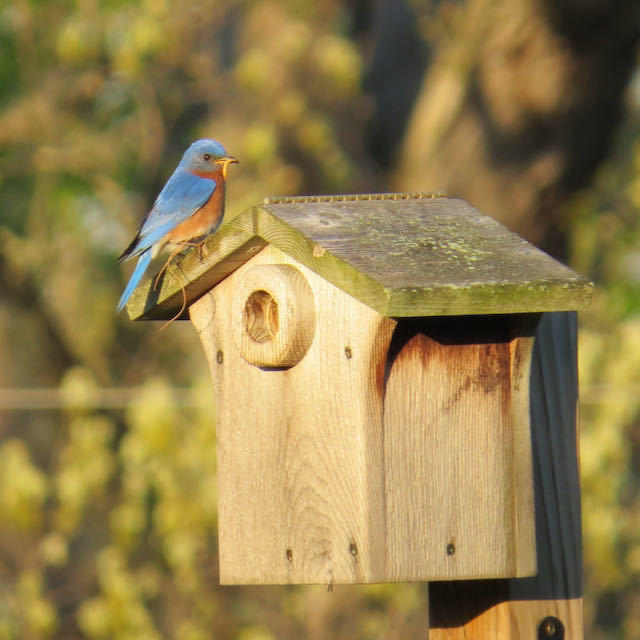 If you put up more than one box, place them about 100 yards apart for Eastern Bluebirds. Since Tree Swallows often share the same habitat as bluebirds, it's even better if you can mount nesting boxes in pairs—one for bluebirds and one for swallows— 5 feet to 25 feet apart, and then go 100 yards and set up another pair. Tree swallows are often more numerous and more dominant, but two pairs of swallows won't nest that close to one another, yet a pair will allow bluebirds to nest in the second house. This allows both species a chance at nesting successfully.
Mount each box on a pole, 5 feet above ground, with the hole facing toward the open landscape.
Use a baffle to prevent squirrels, raccoons, snakes or other predators from raiding the boxes.

Leave boxes up year round as bluebirds will roost in them on cold winter nights. In autumn, add a layer of wood shavings to the bottom of the box to act as insulation on the floor and stuff the ventilation holes with WBU cotton nesting material to keep the winter winds from blowing in. Remove the stuffing in the spring.

Put up only as many boxes as you have time to monitor.
Check the box weekly from March 15 - August 15.
Record this data: date breeding began, date eggs were laid, date eggs hatched, number of eggs laid in one season, and date and number of bluebirds fledged. We use the Cornell NestWatch App for quick and easy data management. You can access it online or from your smartphone. https://nestwatch.org/
If you find English House Sparrow nesting material, remove it. These birds, which are not native to the United States, are known for taking over bluebird nesting boxes and destroying the eggs and killing the young. Do not disturb any other species you may find, simply add more boxes.
Do not inspect the box when fledglings are 12 days old or older—they might fledge too early.
If possible, check boxes in the early afternoon so your scent will dissipate by evening.
Bluebird nesting facts
Male bluebirds establish a territory of two to five acres.
The male and female court in March and April, and the female chooses the nesting box.
Bluebirds lay eggs one at a time daily until they complete the clutch of three to five eggs.
They incubate the eggs for 12 to 14 days.
The young fledge in 15 to 20 days.
Bluebirds may have one to three broods, sometime moving to a new box between broods, which is why installing as many houses as you can is very helpful. (Tip: add two new houses every year and it won't be long before you have your very own bluebird trail.)

What makes a good bluebird house? 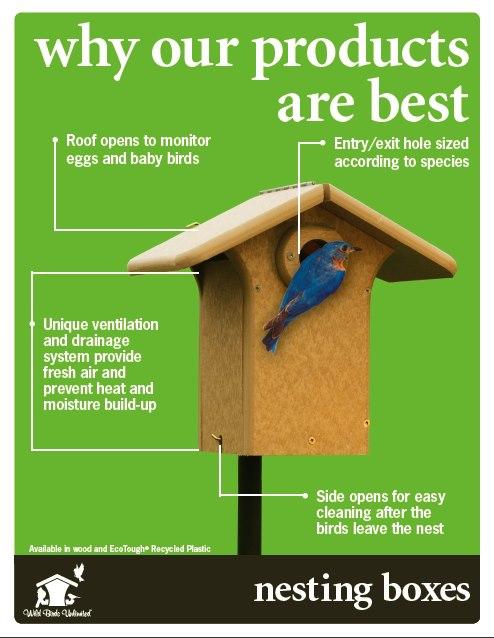 The North American Bluebird Society has given its "seal of approval" to the Wild Birds Unlimited Bluebird Nesting Box.
Our nesting box has the correct size hole for bluebirds and features other amenities bluebirds desire.
The roof opens so you can see eggs and baby birds.
Thick wood or recycled panels provide insulation and natural wood finish has no paints or stains.
Our unique ventilation and drainage system provides fresh air and prevents heat buildup.
Side opens for easy cleaning after birds have left the nest.

Wild Birds Unlimited of Springfield is proud to support Lincoln Memorial Garden and in addition a donating a year-round supply of feeders and food, we have installed a 15 house bluebird trail throughout their prairies. This trail is monitored each nesting season by WBU's owner and a dedicated group of volunteers. Since it's inception and through the 2021 nesting seasons, the trail has fledged 135 Eastern Bluebird babies, 228 Tree Swallows, as well as a number of wrens and chickadees.
When you install bird houses in your yard, you too can help bird populations. 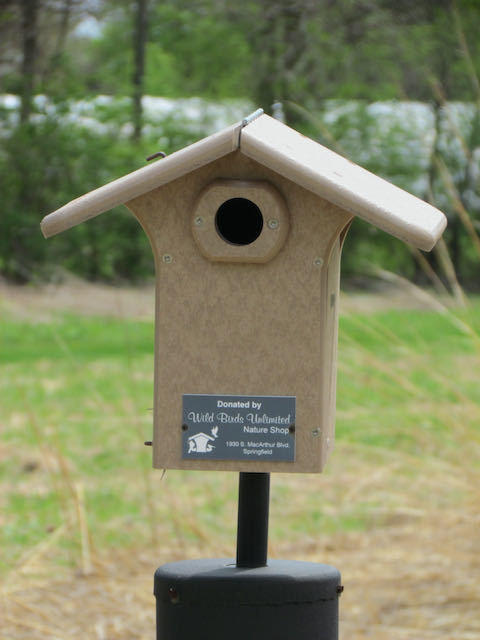